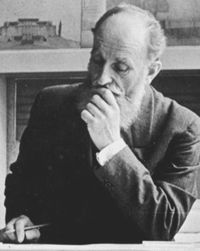 At the beginning of his career Pieter Lodewijk Kramer worked for the office of Eduard Cuypers, as other later protagonists of the Amsterdam School did, like Michel de Klerk, Jo van der Mey and Berend Boeyinga. He left in 1911 and realized his first project, the building for Minor Marinepersonel in Den Helder (destroyed). As an assistent of J. Van der Mey he contributed at the exhuberant Scheepvaarthuis. From 1917 he joined the Public Works Department until 1952. In this function as chief architect he designed more then fivehundred bridges, of which over twohundred were realized in Amsterdam. Furthermore he designed, in collaboration with M. De Klerk, the most important residential complexes for De Dageraad. Department store De Bijenkorf in the Hague, (1926) was his tallest building. (Radboud van Beekum Foundation Boeyinga - Nieuwe Amstelstraat 68 1011 PM Amsterdam The Netherlands).