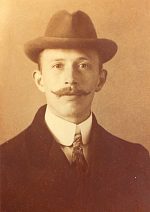 Contractor's son Cornelis Kruyswijk was skilled in the workshops of his father, got his education at the Industrieschool in Amsterdam, and worked as an architectural overseer for architects like H. Elte and F.A. Warners before starting as an independent architect in 1920. In the famous Plan-Zuid in Amsterdam of H.P. Berlage he builded a variety of housing blocks, the most important at Meerhuizenstraat (1922) and the Victorieplein (1924).
In another townplan in Amsterdam-West he reached high standards in designing dwellings in the Mercatorstraat (1927). Being a convinced protestant he builded a great amount of christian primary schools.
His delicacy in proportions and good detailing is most strickingly seen at the Smallepadschool (1924) and the Prinsengrachtschool (1925). Typography on his buildings is worthwile as well. Ignored long after his early death at an age of fifty, and even his important Eltheto-church (1929) torn down in 1992, he regained respect in recent years, and some of his buildings became state or municipal monument. (Radboud van Beekum Foundation Boeyinga)